Moms work hard — there’s no arguing that! This Mother’s Day, shower her with attention and praise (oh, and gifts!). Here are a few ideas to show Mom you’re thinking of her:

Play to your strengths! Are you super handy with a hammer? Build her an above-ground garden and help her plant for summer! Know your way around a car waxer? Give her car a good shine. Maybe you help her tackle those kitchen cabinets she’s been wanting to repaint for years. Whatever that at-home project is, she’ll be grateful to check it off her list.

A coffee table book is more than decoration or a place to set your wine glass — the right book can inspire, educate, and tell a lot about the person who displays it. Pretty and practical, just like Mom likes! We like this one by Frances Palmer, this one by Gray Malin, and this one from National Geographic.

This product is a fun twist on the Bluetooth speaker. TikiTunes looks like a tiki light that adds awesome ambiance — and music — inside or out. It can connect to most smartphones so that Mom can use her favorite music streaming service as she entertains or hangs out. The warm, LED lights work with or without music. The key part of this gift, though, is doing the initial set-up for her! That way, it’s a hassle-free gift she can enjoy again and again.

They say the greatest gifts are from the heart — and what could be more heartfelt than a collection of your favorite memories with Mom? Although formal versions of a memory journal are available to purchase, you don’t have to get too fancy with this. Find a pretty notebook at your nearest craft store or home goods store, and grab a pen! Whether you want to fill the pages slowly over time or pass the journal back and forth to each take a turn writing down a memory is up to you.

Something that smells lovely is always a wonderful gift. These Candlefish candles are hand-poured in Charleston, South Carolina, and use 100% soy wax and the highest quality natural oils. Choose from a vast range of fragrances to find one that’s right for your mom. Whether she’s into spicy scents, warm earthy notes, or florals for spring, this shop has what you need.

We may be partial, but a framed mirror adds a touch of elegance, light, and function to any room. A smaller decorative mirror may be just what your mom needs to complete her hallway or living space. Or, if you live near her, you could sneak over and measure any plain, unframed mirror in her home and create a custom gift for her with our Add A Frame® option. It can truly transform a space! (Not confident in your measurements? Don’t worry, we have an eGift Card available for you!)

… because she deserves to indulge a little on her special day!

No matter what lengths you typically go to on Mother’s Day, the most important thing is that Mom knows you’re thinking about her. After all, she already has the best gift ever: Getting to be your parent. Happy Mother’s Day!

Mirror, mirror on the wall … what is your history? The answer is surprisingly storied.

For much of history, mirrors were reserved for the extremely wealthy. These days, we walk around with compact mirrors in our pockets, check our lipstick in a rearview mirror, and have a framed mirror in several rooms of the house.

How did that happen? Let’s go back to the beginning.

“Mirror” is derived from the Latin mirari (“to wonder at, admire,”). That makes sense. But what is fascinating is that the earliest man-made mirrors weren’t what we think of as a mirror at all. As early as 6,000 and 8,000 years ago, mirrors were made from polished obsidian, a black volcanic stone.

Here’s the eerie part: These rudimentary mirrors were found in the graves of women in Turkey.  Some archaeologists conclude that people during this time period believed mirrors had something to do with predicting the future or understanding the spirit world.

In fact, mirrors are also deeply woven into mythology and folklore in a wide range of cultures across the world.

The art of creating mirrors from metal doesn’t appear in history until roughly 4,000 years ago. In China, bronze and mixed metals were highly polished to shine on one side and have intricate inscriptions on the other side. Similar copper mirrors have been discovered from around the same time period in Mesopotamia and Egypt.

Mirrors were only owned by the rich and fabulous at that time, and were used for both utilitarian and religious purposes. Even now, mirror placement is important in the practice of feng sui.

(Be sure to check out our tips on how to position mirrors in your space!)

Over time, rounded glass mirrors became more readily available. Leonardo da Vinci introduced a secret code for spies that involved writing in a way that could only be read with a mirror reflection.

Fast forward to the 1400s: The first blown, polished, coated, flat glass mirror originated on the Italian island of Murano, located in the Venetian lagoon.

For several centuries, these Venetian mirrors were considered the absolute height of luxury. Of course, that made them incredibly desirable in places like Paris. So, in the 1660s, King Louis XIV had workers trying to replicate the ultra-secret formula of the Veneitan glass workers. The problem? His craftsmen were suddenly dying because of the exposure to dangerous heavy metals and toxins (like mercury).

Ultimately, the French caught on and figured out how to create the mirrors from coated glass — but not without scandal along the way (spies! murdered glassmakers! so much money!).

These mirrors were the closest iteration of the mirrors we’d use today — but at that point, they were still extremely expensive and a mark of wealth.

Over centuries, mirrors have shifted from magical symbols, to religious emblems, to objects of vanity, to practical use. Now, they’re an affordable way to add light and open up a space. And, you can even customize a framed mirror with just a few clicks on your keyboard. (No scandal required.)

It may seem counterintuitive, but some of our greatest thoughts might just come to us while we’re in the bathroom. Whether it’s chalking up a to-do list in the shower or gaining some insight from a bathroom read, there’s something to be said for a little time alone to just think. If you’re going to be spending some time in the bathroom, you might as well be learning a thing or two about the world or about yourself. Take a dive into some of the best books to stack in your boudoir.

Chock-full of quotes from history’s brightest minds, from Buddha to Fred Astaire, you’ll find just the inspiration or giggle you’re looking for when it comes to aging with grace, or at least with a sense of humor. With this read conveniently in your bathroom, you might just leave the room a better person.

Featuring some of the best works dug out of fifteen years of O archives, you’ll find lessons on asking for what you want, Neil DeGrasse Tyson’s universal wisdom, and other enriching stories told by some of the greatest writers to date. Don’t worry, no one will judge you for staying in the bathroom just a little bit longer.

Self-Help: Better than Before: Mastering The Habits of Our Everyday Lives by Gretchen Rubin

Not only testing her theories on herself, but on family and friends, Rubin breaks down habit formation and why it can lead to a happier, more productive life for all of us. From discovering which habits you should keep and which you should ditch, to why it’s just so hard to make them, you’ll be better for reading this. At least you’ll feel better knowing you’ve mastered one habit: bathroom breaks.

Must-Have: Everyone Poops by Taro Gomi

As self-explanatory as need be in its title, this humorous take on something we all do sets a great tone for any bathroom guest. From young to old, anyone flipping through these pages will have to get a grin on their face.

You’re going to have to bear with me here for a minute. As you are probably well aware of by now, mirrors are kind of a passion of ours around here. So when we come across something like this it kind of blows our mind.

Now I’d heard of the Palace of Versailles before but I had no idea that it had a room like this! The Hall of Mirrors?! You had me at the name alone! As the name implies, the Hall of Mirrors (or Galerie des Glaces if you’re feeling fancy) houses seventeen mirrored arches that reflect the view over the palace gardens. Not a bad idea at all when your backyard looks like this!

“Orangerie” by Urban at fr.wikipedia – Licensed under CC BY-SA 3.0. 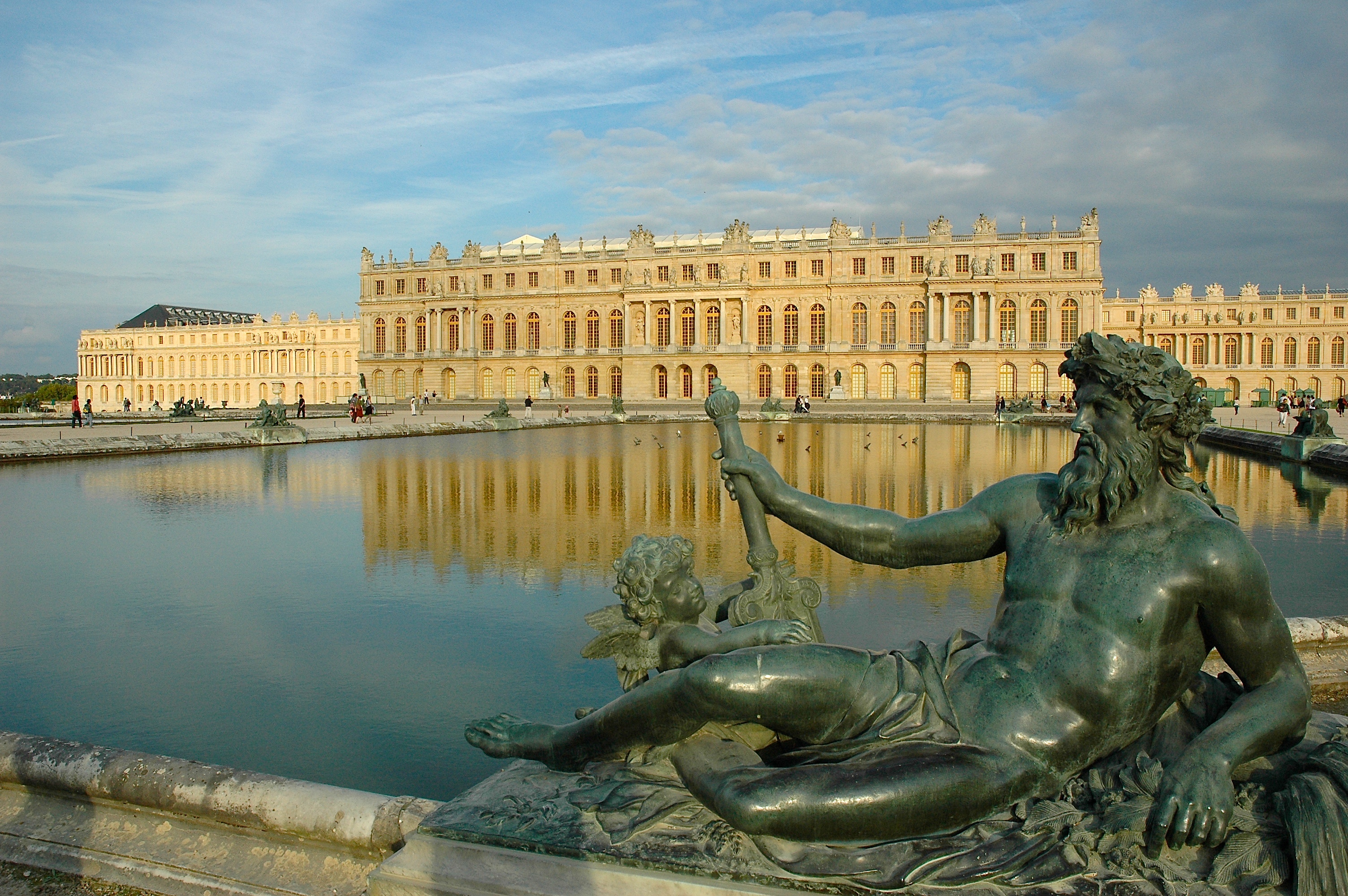 Now you may not be able to recreate something exactly like this in your own space, but there are some mirror frame styles right here at Frame My Mirror that evoke that larger-than-life, palatial French style. If you’re in the market for a little regal flair check out the Hudson in Nickel or Val Verde in American Pewter. Before you know it you’ll be shouting “let them eat cake” to the masses!

Because of our business, we like to consider ourselves experts when it comes to bathroom design. That being said, we still like to acknowledge those that came before us. Those who pioneered bathroom design and functionality (shout out to the inventor of toilet paper), and that’s exactly what we’re doing here with a little trip into the bathrooms of history.

For this installment, we’re featuring the bathroom of one of history’s larger than life characters. The one and only King Henry VIII. While you might not have guessed by looking at him, Henry VIII was quite the innovator when it came to hygiene in Tudor, England.

When the monarch elected to make Hampton Court Palace (pictured above) his primary residence he demanded – in true kingly fashion – that a new “royal throne” be built within his stately tower. The room consisted of a beautifully constructed window seat, a gold-patterned ceiling and an imposing copper tub…high style even by today’s standards.

Perhaps even more famous than the bathroom itself was the king’s personal toilet within his Privy Chamber. While certainly an interesting feature as it stands, it’s what the king kept with his toilet that makes the story so interesting. The room was served by a personal attendant known as the Groom of the Stool. That’s right. And owing to the “close and personal” nature of the job, the position was highly coveted by courtiers of the period.

So there you have it. From us, the people that make bathroom design their business, we proudly honor Henry VIII and the room he fashioned to do his business.